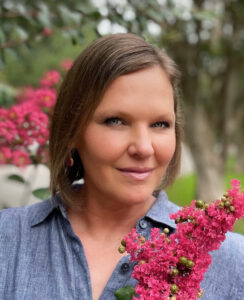 Short bio:
Chris Cander is the USA Today bestselling author of THE WEIGHT OF A PIANO, which was named an Indie Next Great Read in both hardcover and paperback and which the New York Times called, “immense, intense and imaginative,” WHISPER HOLLOW, also named an Indie Next Great Read, and 11 STORIES, named by Kirkus as one of the best books of 2013 and winner of the Independent Publisher Book Awards for fiction. She also wrote the children’s picture book THE WORD BURGLAR, and the Audible Originals “Eddies” and “Grieving Conversations.” Her new novel, A GRACIOUS NEIGHBOR, arrives fall 2022. Cander’s fiction has been published in twelve languages. She lives in her native Houston with her husband and two children.

Background:
Like most writers, Chris was first a reader—of books, of course, but also cereal boxes and shampoo bottles and billboards. Her favorite gift as a kid was a dictionary, which she read from cover to cover. After she published her first poem and won a regional creative writing contest, both at age ten, she knew she’d spend her life pursuing happiness via the written word.

For seven years, Chris was a writer-in-residence for Houston-based Writers in the Schools (WITS), which engages children in the pleasure and power of reading and writing. In addition, she serves on the Inprint and Bloomsday Literary advisory boards and stewards several Little Free Libraries in her community. Chris well knows that the pen is mightier than the sword, but she’s willing to wield one of those, too. A former firefighter and fitness competitor, she currently holds a 4th dan in taekwondo and is a certified ICSU Women’s Defensive Tactics Instructor.